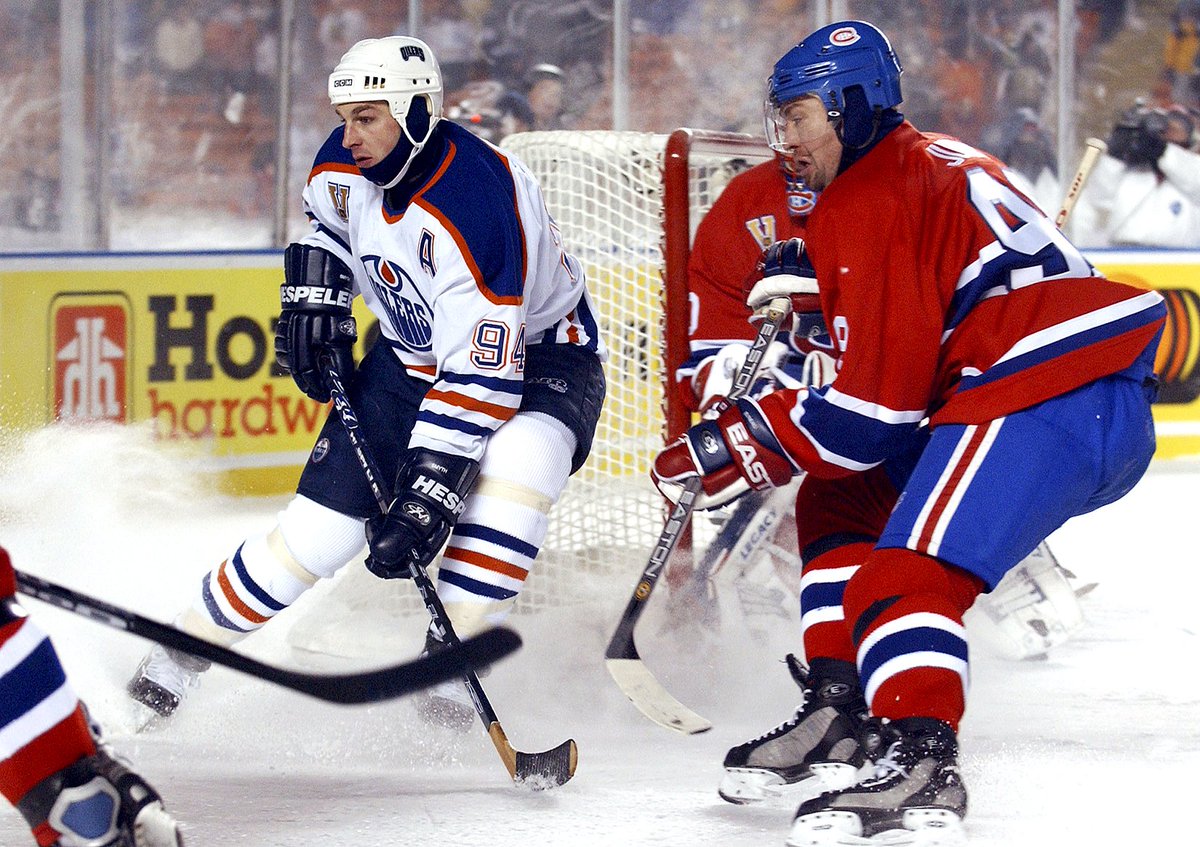 The very first NHL Heritage Classic was on November 22nd, 2003 between the Montreal Canadiens and Edmonton Oilers. Hosted at the Commonwealth Stadium in Edmonton, the 2003 Heritage Classic was the first NHL regular-season game to be held outside. The idea for the Classic was based on an outdoor hockey game between the University of Michigan and Michigan State. Drawing over 57,000 fans to the stadium and another 2.747 million on TV, the game was incredibly hyped as it was a new concept to many.

The game featured throwback jerseys from both the Habs and Oilers. At the time, the Oilers were wearing their Navy/Copper/White jerseys as their regular season uniforms while the Habs donned their iconic red/white/blue jersey. For the game though, the Oilers brought back the jerseys from the Gretzky era with the traditional white/orange/blue combo while the Habs kept their jerseys almost identical to their regular set, with the exception of a lace-up collar instead of their crewneck style.

The NHL took a long hiatus from Heritage Classics since their inaugural one in 2002, having their second take place 8 years later in 2011. This edition of the Heritage Classic was hosted at McMahon Stadium in Calgary pitting the Flames against the Habs. Like 2003, the Habs decided to make minimal changes to their uniform, using their away jersey for the game, but with a different style of numbers on the back. Instead of the primary blue with white and red outline numbers, the Habs opted for a primary blue number with a red outline, similar to their uniforms in the 90s and earlier. The Flames chose to go in a different direction and release a jersey very different from anything they've ever worn before. Their dark red and burnt yellow jerseys for the game were inspired by the sweaters worn by the Calgary Tigers of the 1920s. 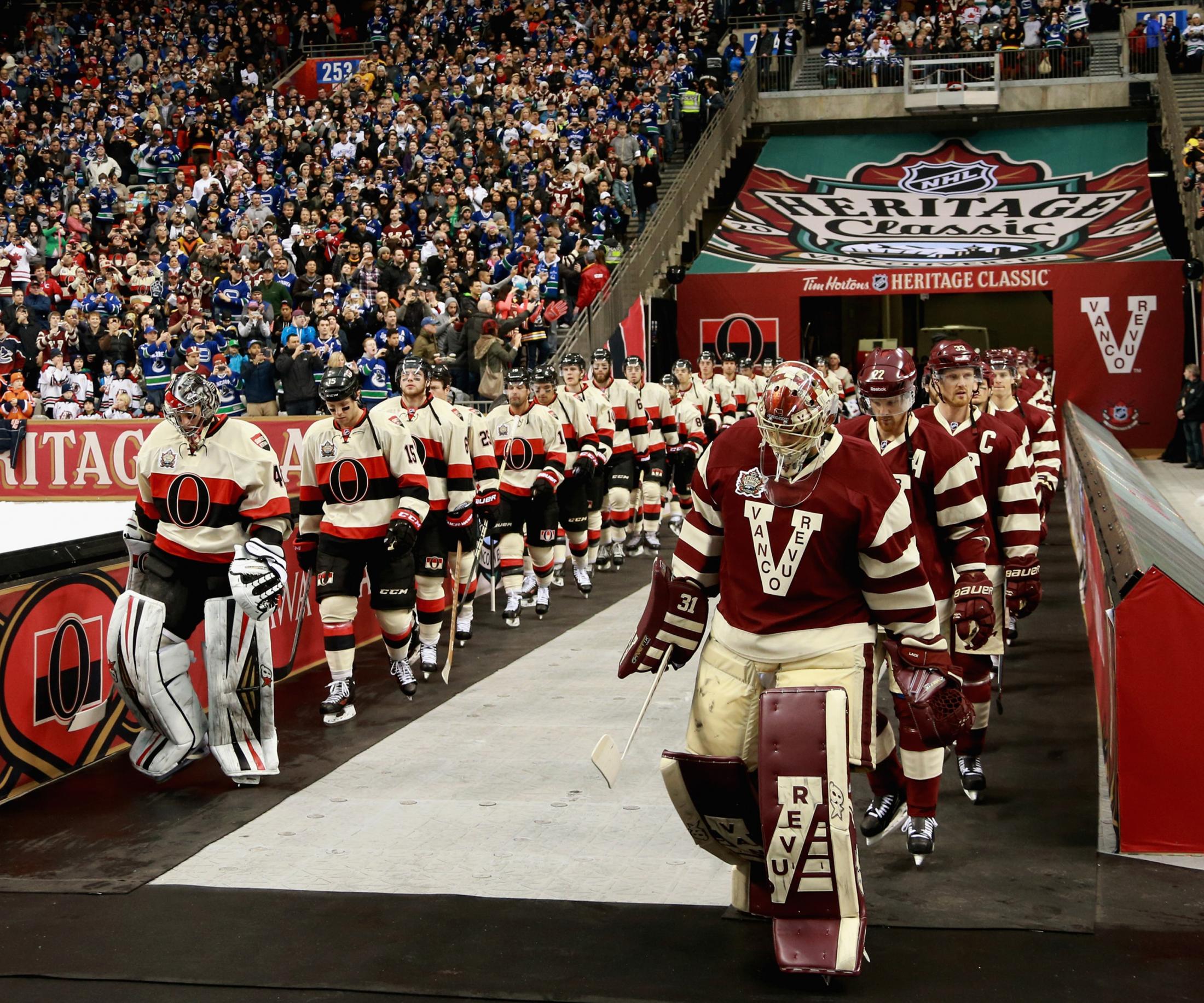 Taking another break, albeit shorter than the previous, the NHL brought back the Heritage Classic after 3 years in 2014 between the Canucks and Senators. The game was hosted at BC Place in Vancouver and produced two new jerseys. The Senators took their black heritage third jerseys from and made a cream version for this game while the Canucks chose to don Vancouver Millionaires inspired jerseys. The Sens took the very popular "O" heritage third jerseys and re-tooled them to a cream/red/black version for the Heritage Classic, leading many fans at the time and to this day, call for them to become a full time home and away jersey set. The Canucks new jersey featured maroon as its primary colour with cream stripes on the arms and a cream logo paying homage to the Millionaires team that played in Vancouver in 1915.

After taking another break from the Heritage Classic in the 14-15 season due to scheduling issues, the NHL awarded the game to the Winnipeg Jets and Edmonton Oilers in 2016. The Classic took place in Winnipeg at Investors Group Field and for the second time, produced two new jerseys, one for each team. The Oilers, appearing in their 2nd Heritage Classic unveiled a jersey based on their WHA days with orange as the primary colour and blue/white as the secondaries. The Jets also unveiled WHA-inspired throwbacks with a white/navy/red alternate based off of their pre-NHL history.

The 2019 Heritage Classic will be played on October 26th, 2019 at Mosaic Stadium in Saskatchewan between the Flames and Jets. Both teams appearing in their second Classic games have introduced beautiful throwback jerseys to be worn at the game. The Flames took their timeless red retro alternate jerseys inspired by those worn in the 80s and refitted it to the Adizero template with their White throwback jerseys. The Jets took a similar approach by using their popular 2016 Heritage Classic jerseys and flipping them to a navy base with red and white striping, again based on their WHA jerseys

What's your favourite Heritage Classic Jersey? Let us know in the comments or on social media!