Collector's Corner: What the Font?

Collector's Corner: What the Font?

This edition of the Collector's Corner was written by top contributor and avid jersey collector, Dave McCormick!

We all have our favourite hockey jerseys and players who wear them. When you think of your favourite jerseys It’s hard to imagine them without names and numbers.  Just like a tie and a pocket square can make a good suit look great the font, or design style and trim, of the letters and numbers used to customize the jerseys, can really make them stand out….or not.

The best examples of the name and numbers most closely identified with their classic jerseys are, for many of us, the individually hand-cut letters that arch the player’s name on the back of the Red Wings’ jersey and the shadowed font used by the Broadway Blue Shirts.

Due to the arching of the names, each particular letter must be cut specifically to the angle of where it will be found within the player’s name. Look closely at the “K” in Datsyuk, Kronwall and Abdelkader and you can see how each of them is cut to a different angle; Abdelkader’s “K” is relatively flat since it is near the top of the arch whereas the K for Datsyuk and Kronwall are cut at opposite angles being placed at the end and start of their names’ arches. 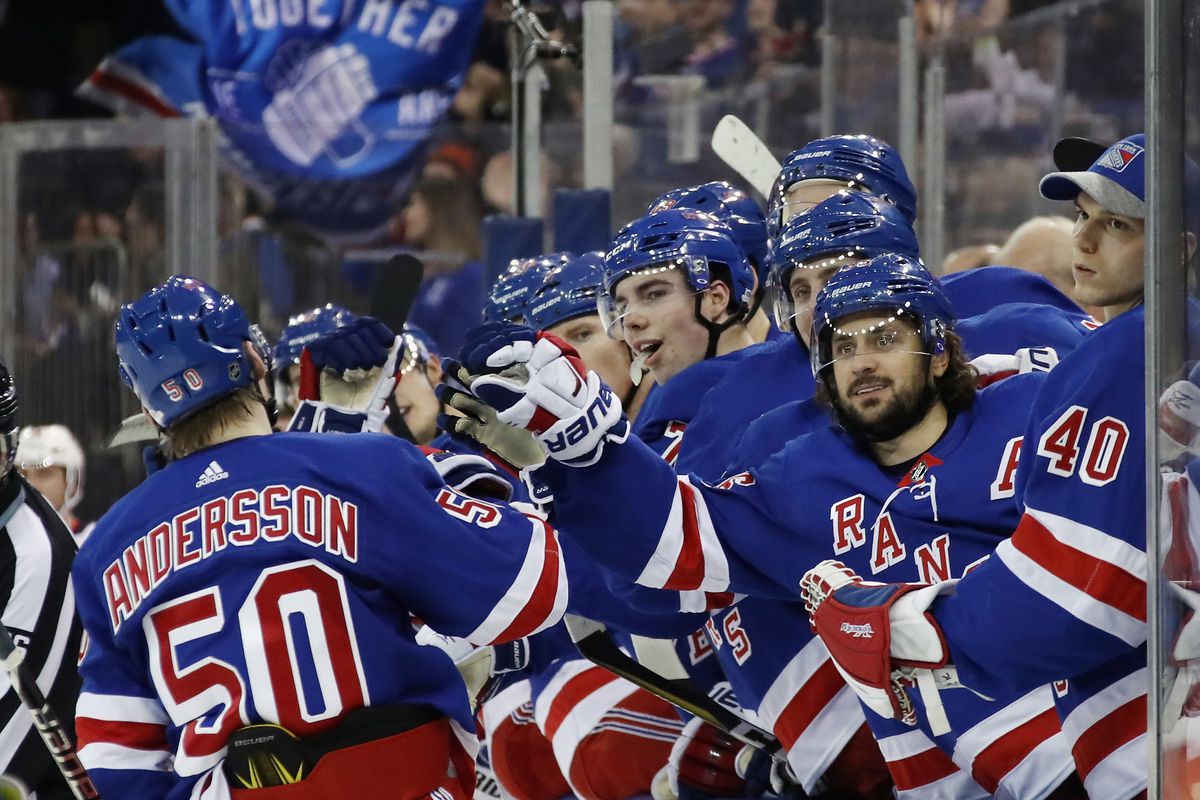 The Rangers also use an arch style but take things even further with their classic shadow font.

From these “old school” classic Original Six jersey fonts we fast forward to a couple of modern examples that use subtle details to give a “stick tap” to their city and team nicknames.  The Nashville Predators pay homage to playing in “Music City USA” by incorporating the 6 strings of a guitar across their uniform numbers. 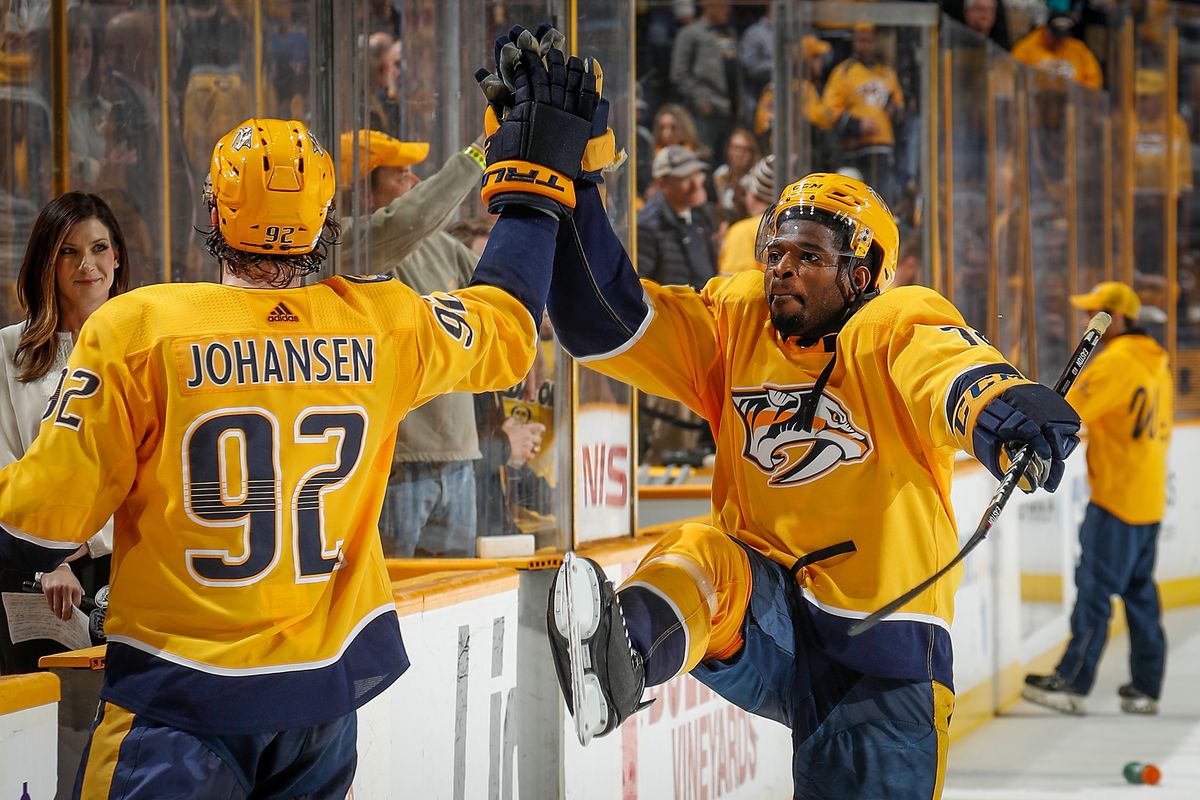 At first look, the numbers for the Anaheim Ducks look a little “ballooned.” Though take a closer look and it’s clear that their uniform designer did an excellent job of matching the number font to mimic the web-foot Ducks logo with both rounded curves and sharp points on the numeral ends: 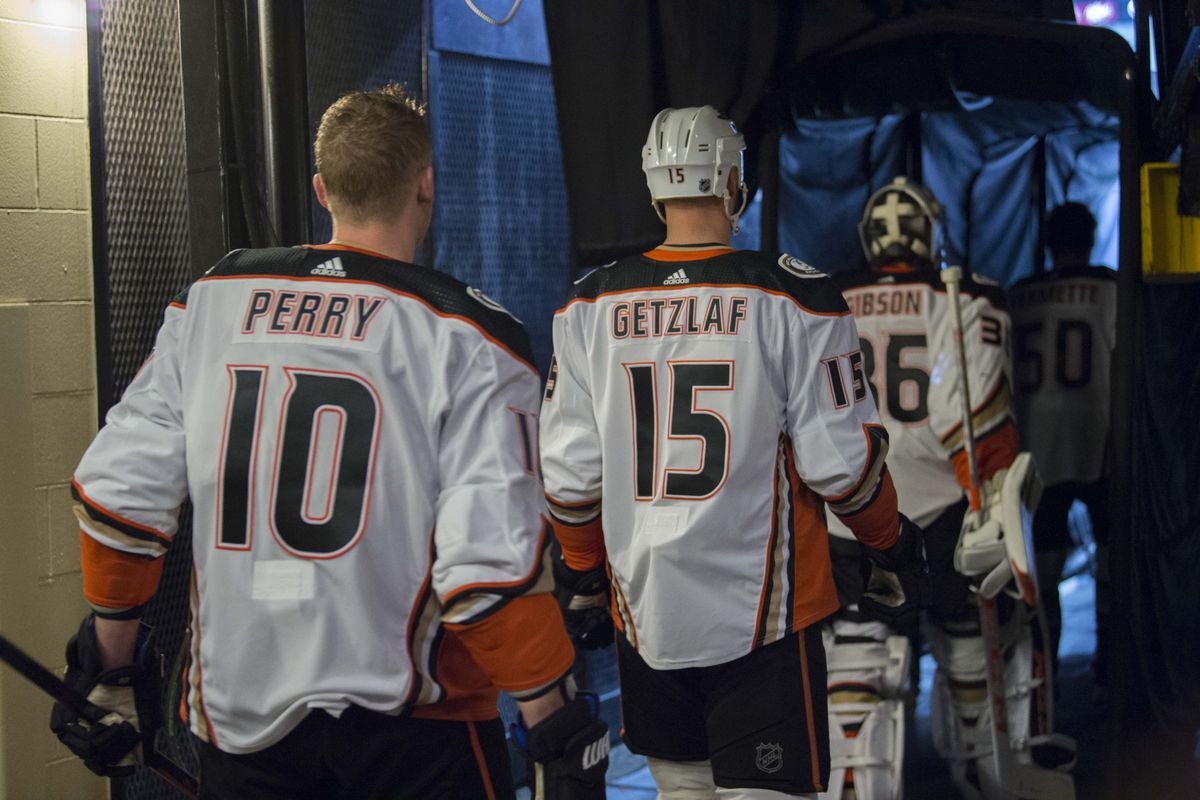 The 2017-18 season brought the Adidas “Age of the Adizero” jersey designs and construction.  While most teams didn’t see dramatic changes to their uniforms we were introduced to a new style of name and number font meant to create a lighter uniform.  The perforated number system was new last year.  It’s nothing we’ve ever really seen before on a hockey uniform. Frankly, I’m not quite sure what to think of these perforated numbers.  They actually look kind of neat in person but, even with the best, 4K HD TV, they don’t always show well watching the game at home.  This number system was adopted by Columbus, Dallas, Edmonton, Florida, Ottawa, and Vegas:

Unfortunately, Ottawa ended up changing their unique “Centurion” style rounded name and number fonts from previous seasons to a boring, basic block style in the Adizero.

Hockey players and fans being as superstitious as we are, Sens’ fans might want to take a close look at how these drab numbers may be responsible for their turmoil and demise last season!

At least a couple other NHL teams suffered a downgrade in the look and character of their name and number fonts by Adidas, in my opinion.  The reason given was to reduce the weight of the jersey but it’s hard not to be cynical to think that the new font style is cheaper to produce but the teams can charge us fans the same amount of money to get our jerseys customized with our favourite player’s name and number.  In addition to Ottawa’s dramatic change the Bruins’ and Avalanche had the other most noticeable differences going from the Reebok jersey to Adidas:

You can clearly see how the Bruins went from a sharp contrasting double trim to less striking single layer trim.

The Avalanche fell victim to changing one of the most recognizable and sharpest number fonts that were previously a distinct crisp double contrast trim with a pointed font to a barely noticeable single trim that removed the sharp points from the numbers.

Just as the 1990s brought us some of the most recognizable/infamous jerseys that decade also brought us some of the more memorable name and number font styles that I’d love to see return; if only for a single throwback game against each other.  How could we ever forget the uneven numbers of the St. Louis Blues uniform to fit above the asymmetrical hem trim?

Or how about the curved name and numbers on the Islanders’ “Captain Highliner Fisherman” jersey to ride the wave pattern of the jersey trim?

Last but not least, I need to finish with my all-time favourite name and number font.  Although it’s never been seen in the NHL and the colours have changed I’m thrilled that this classic-90s inspired font that best represents the team’s nickname (even better than the Ducks’ web feet font) is still seen on the ice today; albeit in the American Hockey League.  I’m talking, of course, about the antler font of the Manitoba Moose! (and yes, I know, the team started in Minnesota but didn’t start using this font until they moved to Winnipeg)

These are just a few stand out examples – good, bad or indifferent – of hockey jersey fonts.  With all of the alternate jerseys, Winter Classic, Stadium Series and subtle changes made by different manufacturers over the years, we jersey geeks have a lot of name and number font variety to deride, debate and enjoy about our favorite uniforms.